Dot writes: in 1014, there was a famous battle just down the road from where we live. Today we went and watched it in St Anne’s Park. I suspect that a thousand years ago there were no hotdog stands or parking areas provided, which just shows how civilisation has advanced. (Gripe: we travelled by bike and were turned back at the gate by the security people. We then just went to a small entrance a few hundred yards away that they hadn’t bothered to man and went in that way, but it was still very annoying that our low-impact and healthy transport method wasn’t catered for when cars were. The park entrance is walkable from our house but the area where the festivities were taking place was just a bit too far for the boys to manage there and back.)

Clontarf has been preparing for the great anniversary for some time, for example by adding some new attractions to the playground.

Actually the cow has been there for ages but I had to put in a picture because it is so peculiar. Who on earth thought that was the right place for an udder? It looks like a prolapsed uterus. Anyway, I digress. The above pictures were taken at the start of March. Here, by contrast, and illustrating the strangely marvellous weather we’ve been having, are some views from today. 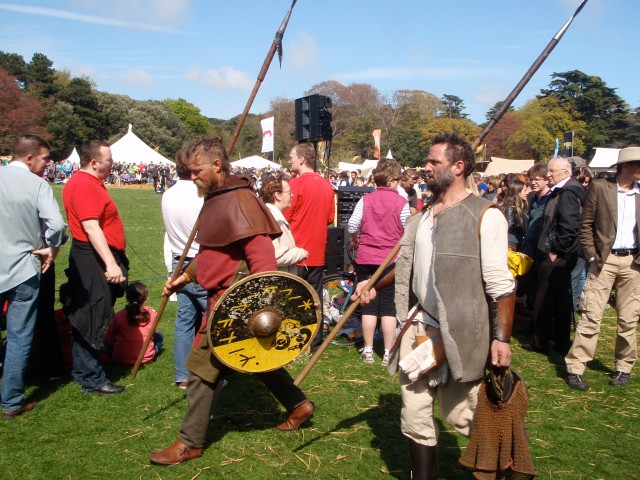 The Battle was the Valhalla version: when everyone was dead they got up and had a re-match. In fact they had three of them, and that was just the 1pm performance; there was another performance at 4pm and there are two more tomorrow. All the warriors seemed happy.

There was the most dreadful wagon of a woman standing in front of me at the battle. She kept turning around to yell things to her friend further back in the crowd which, as she was right by me, meant yelling in my ear. Then some people sitting on the slope behind us asked us to sit down so they could see, since they had, after all, been there first. One of my neighbours patted the woman on the shoulder as she was standing right at the front, but her reaction was to exclaim irately “Would you take your hands off me!” Then I pointed out that if she sat down I would be able to sit down and then the people behind us could see over us, but she said “Not a chance” and went on standing – which meant that I did too, as otherwise I would have had a close view of the back of her knees. Fortunately she left fairly early on (whereupon I knelt for a bit, but then gave up as there were still people standing all around me and the people on the slope couldn’t see anyway). The boys and I had a fabulous view and it was alright because I felt really guilty.

And we have bought Hugh a toy crossbow. Yes, we deserve everything we get.

6 thoughts on “Battle of Clontarf”